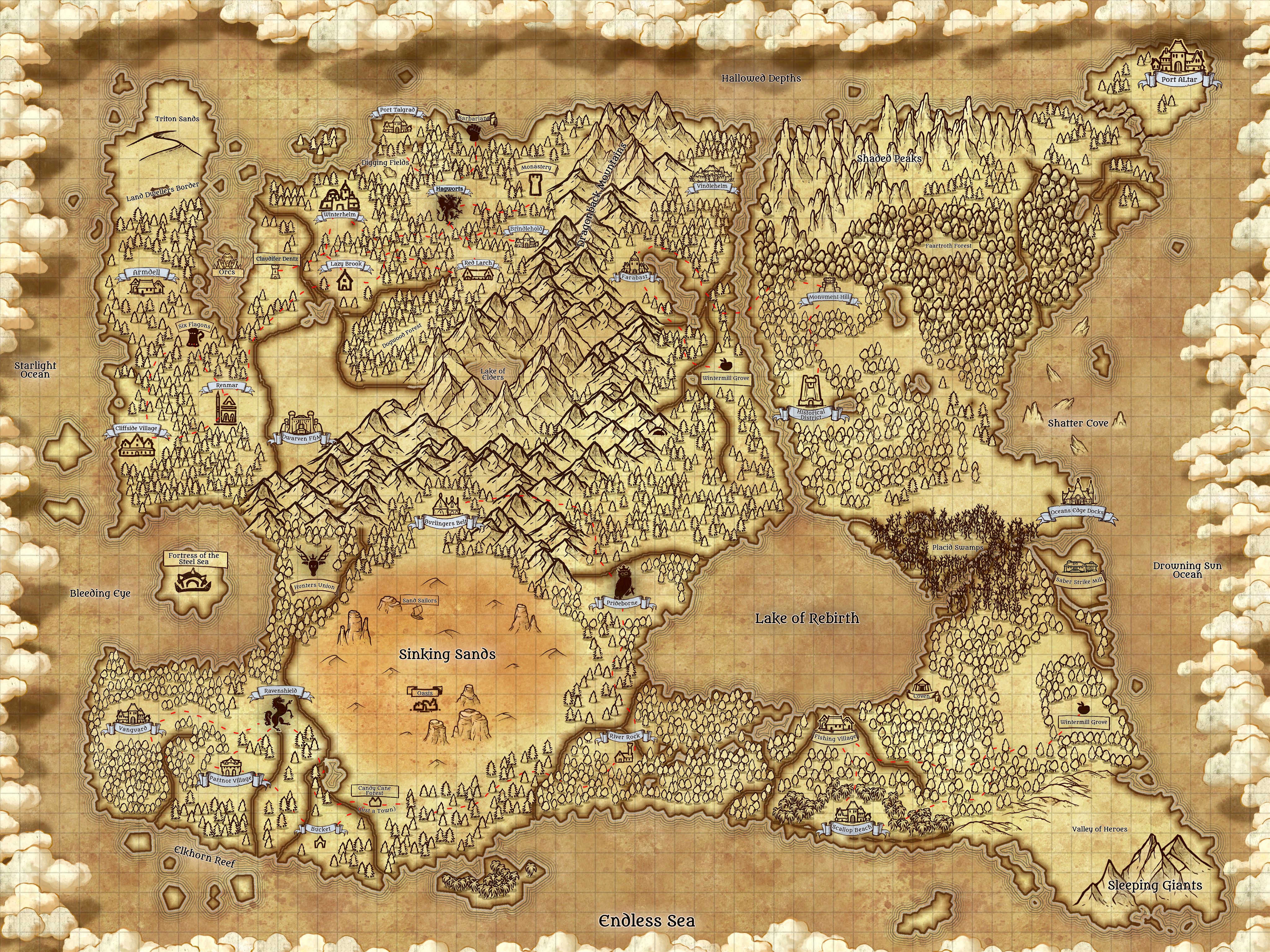 The large beach in the NW peninsula are owned by a tribe of Triton followers. Much of their day is spent warding off land walkers and scouring the sands to pull vegetation out by its roots. Their religion demands that there is only ocean and sand. To the North West of the Dragonback Mountains is free land. Malbus Smartledore the Headmaster of Hagworts School of Magic has fought to maintain an unruled land that cannot be corrupted by politics.

In the NE is Fartroth Forest, littered with Orc’s and unsavory characters, this shifting forest is clouded in dark enegy and mystery. Near the forest are momuments to old gods and the dark peaks. The bridges connect to a sailor’s village and port. This port is also considered unruled and has been defended successfully many times from those who look to take it over and find refuge in the forest. The Bleeding Eye, named because it grows a rare red algae once a year and gets dispersed into the sea, is controlled by Gammet Tong. A murderous madman that has a fortress in the water, only accessible by boat it is under constant watch. The large mining and forestry company ran by a Dwarf named Porlo is a major resource for all of Liege.

The kingdom of Prideborn, it had a bloody and violent history until it’s king was killed and replaced. The current king gave a lot of the conquered land back that was stolen and has ruled his land peacefully. The Sleeping Giants are part of Prideborn but have experienced a mysterious tragedy that is killing alot of the southern woodlands. The south also has a combination of desert sands that were created during the war of Elders, farm lands and seaside retirement villages, as well as the Cleric Academy. An offshoot of Hagworts, the Cleric Academy is often heralded as being a superior school even though it focuses on one craft. A major difference is in relation to their funding. The Cleric Academy is funded by an organization with shadowy intentions. They are located in Vanguard and their technological advancements have given a boon to the neighboring towns.

Liege is a massive continent, the largest land mass in the world as well as the only land mass in this world, beside the islands that surround it. Many have ventured to find new lands only to find endless waters or terrible storms that would crush any vessel that tried to sail beyond its towering waves. 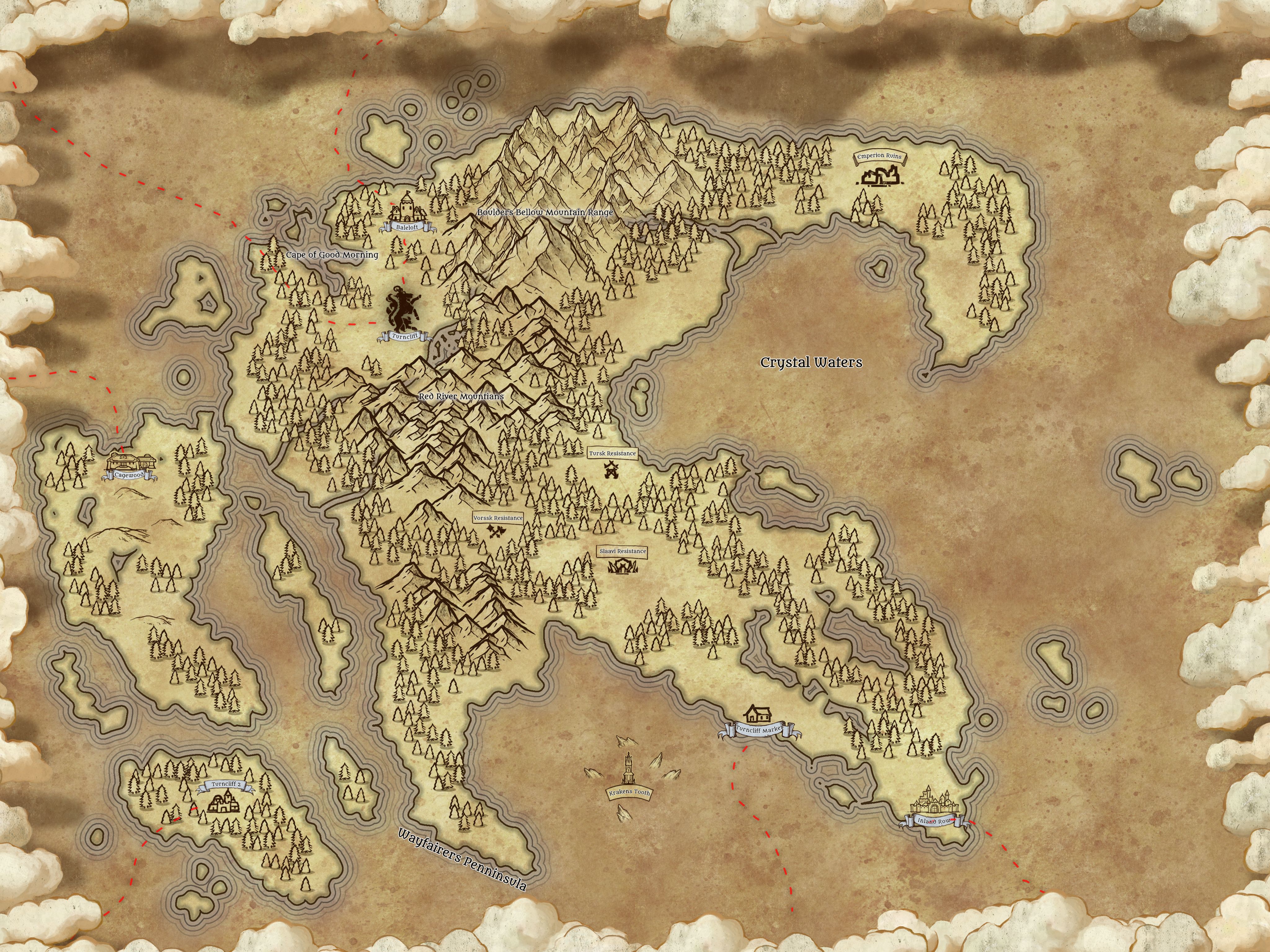 A large island in the Nw if you cross the Starlight Ocean, whose waters are known for the luminescent glow of the Nocturn Jellies that move in large groupings in the dark, the Jartung Islands are known for constant battles, hauntings and may legends that surround the northern features of the island. The port of Inland Row and local Turncliff markets are close together for tourism, but the Kingdom of Turncliff is nestled in the back side of the Red River Mountains. Between Inland Row and Turncliff are a variety of Orc Tribes that historically have waged war against the kingdom. The battles between the two have raged in the moutain tops, so much so records indicate they have actually ran with rivers of blood from the fatalities, giving the mountains their name.

The largest mountains are located at Boulders Bellow, named for the low hum that can be heard while scaling its massive cliffsides. The Krakens Tooth is a dilapitated tower that sticks out of rocky pillers in the sea. Believed to be an old look out tower in the ancient days, many see it as an old relic and is mostly ignored. Turncliff 2 is an example of the islands immaturity. A subset of civilians were upset with the politics of Turncliff and decided to create their own township. The sad part is they had no clue how to organize and run a place like this, so it fell into poverty very quickly and is known as an embaressment to the island, an embarressment no one in the community would admit to. To them, Turncliff 2 is the pinnacle of success. 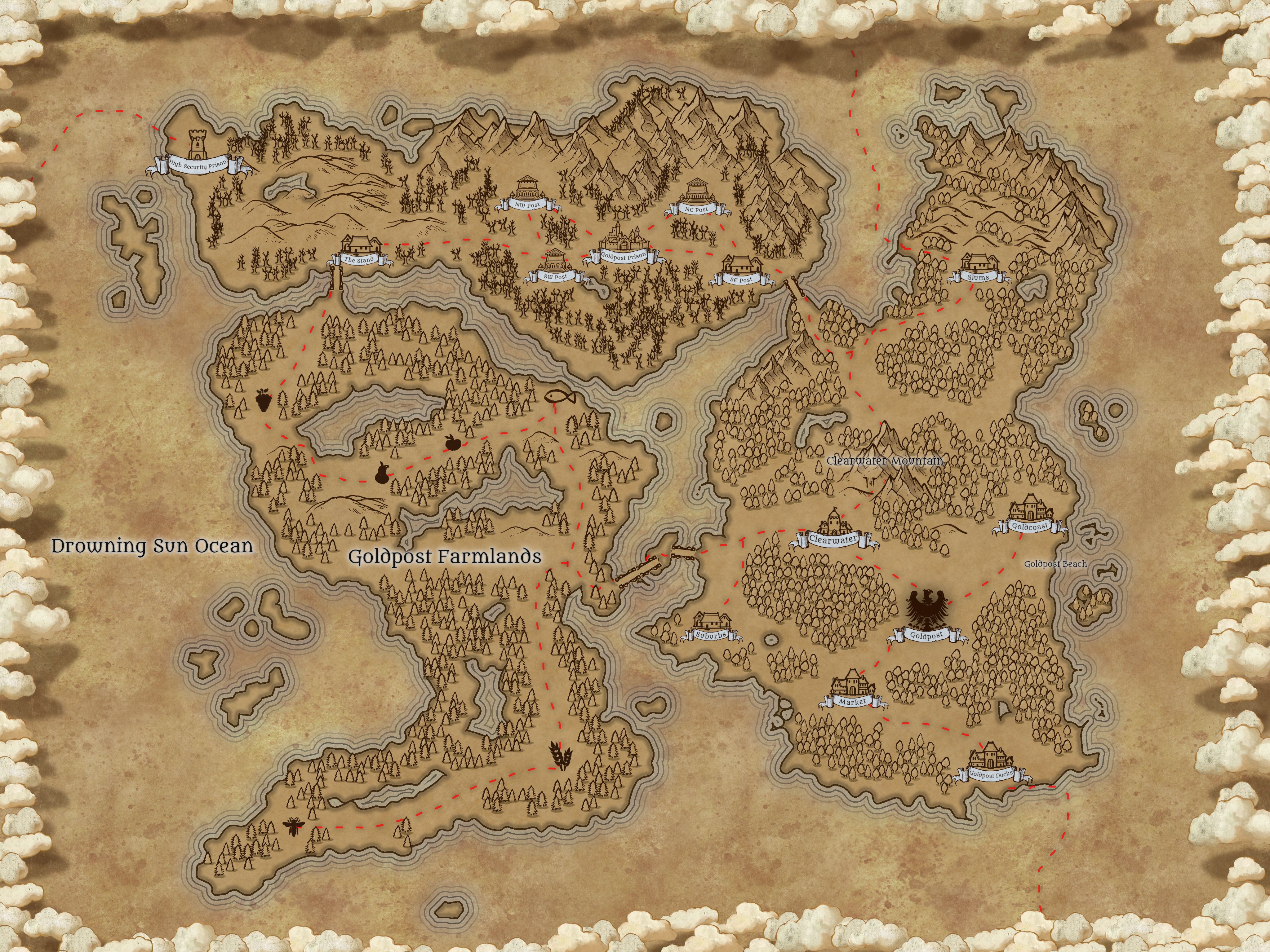 The Gold Post islands are actually 3 islands connected by massive bridges in the Sinking Suns Ocean. The SW farmlands are dedicated to groves and crops that help keep Gold Post thriving. The SE island is the official Gold Post kingdom, with nearly all of its land mass covered by structures and man-made parks it is truely a land of industry.

The only natural structure that has not been altered is a large mountain whos snowfall melts and supplies Gold Post with it's fresh water and a small beach on the west side of the island which is known for its beautiful golden sand. In the North is a mountain capped island where the Gold Post Militia congregates and have created prisons and train a ferocious and skilled army. Due to pirate raids they have evolved into a terrifing fighting force that discriminates against any visitors who do not meet the Gold Post social standards. 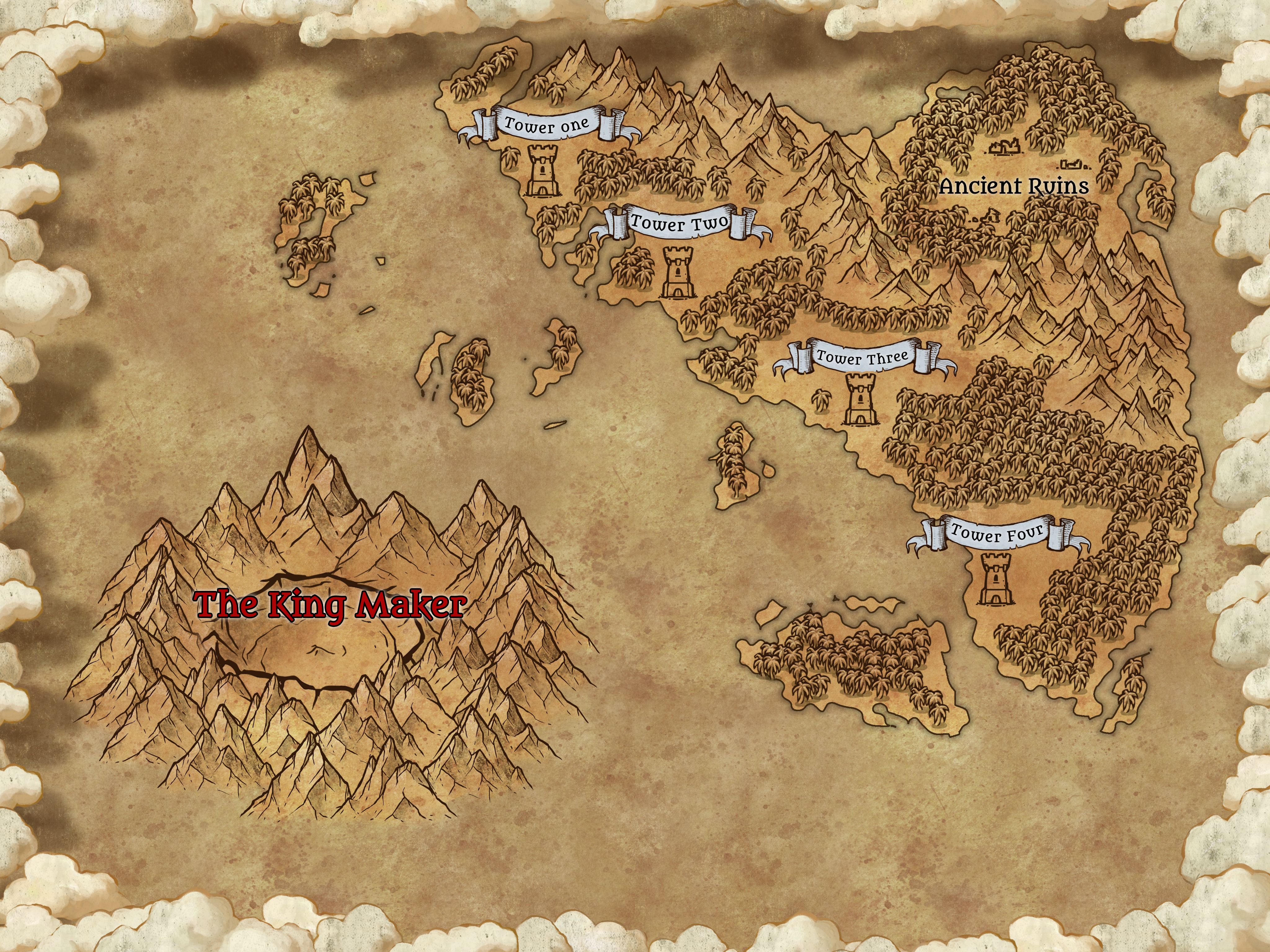 The Endless Sea houses one of the most mysterious islands in our world. A small island houses four massive ancient towers. Each tower, according to historians, was a powerful arcane lab used to tame the adjacent King Maker island.

The King Maker is an island of volcanoes that are believed to have birthed the 5 Dragon Elders who ruled the land for many years. Thanks to the extreme heat and uninhabitable landscape, many dragons and creatures found a home here to reach maturity and gain enough strength to approach the mainland. Did the towers have something to do with guarding Liege from any further creations? No one is sure, but it is believed the answers may be locked deep inside the towers. 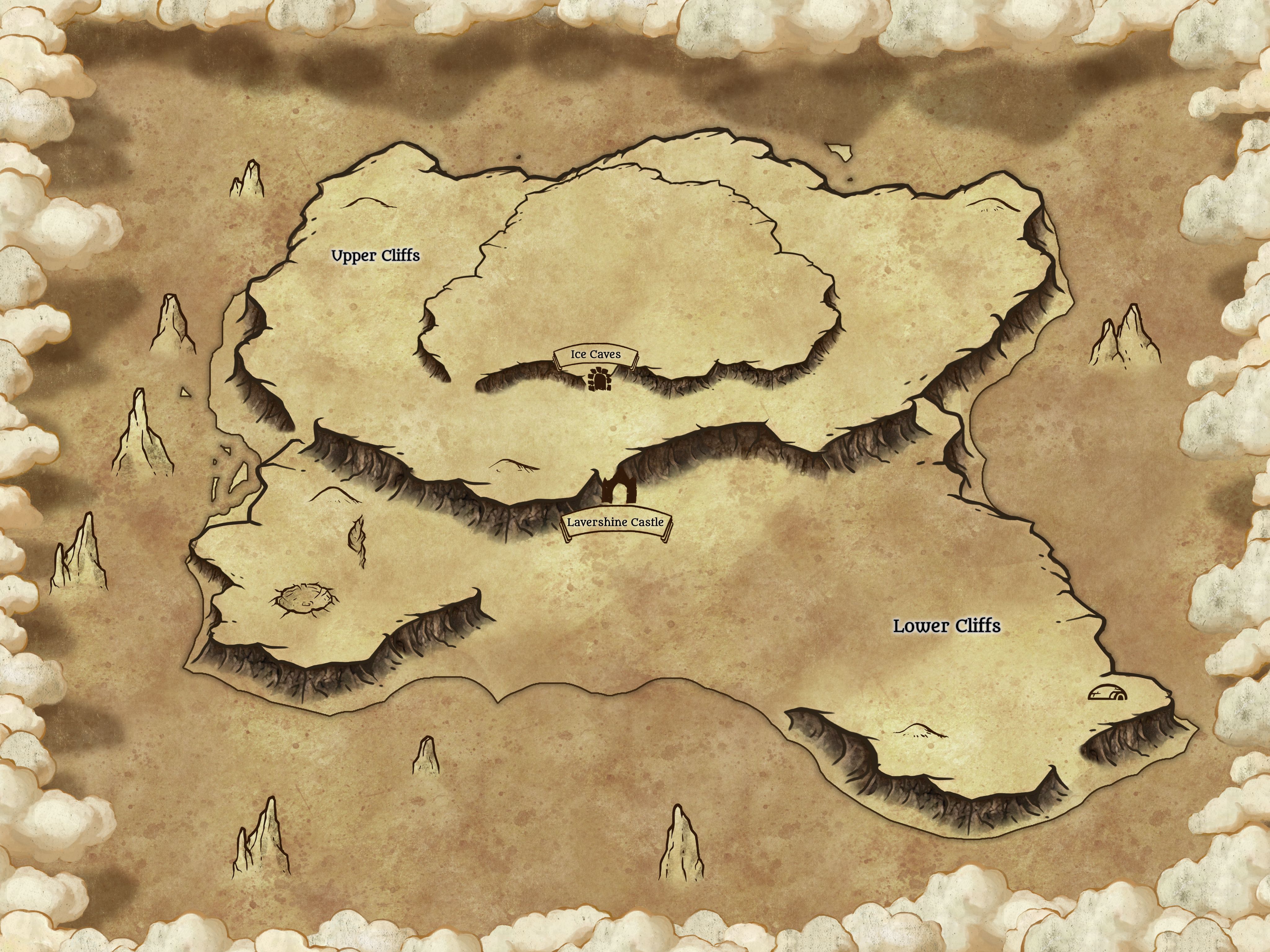 The Ice Cliffs are a frozen wasteland far North in the Hallowed Depths, that was once home to the merciless warlord Exio Lavershine. Exios castle lies deep within the ice underground, leaving the Ice Cliffs a grim and cold reminder of the horror Lavershine Castle brought to the world.

While this is considered the last of the main islands, there are still many dotting the horizon. Another frozen tundra known as Dire Island is a safe haven for criminals and vagabonds, as well as islands of legend that may hold unknown treasure.